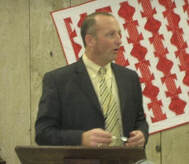 ​Members enjoyed Christmas carols and holiday treats at the December 13, 2011, meeting of the Mid-Jefferson County Retired School Personnel. Members Dottie Youngblood and Gail Krohn led the group in song. Historical background of the songs was also presented. Each member brought his or her favorite holiday treat; leftovers were delivered to the MTC Credit Union in appreciation for their help in printing the monthly newsletter. ​